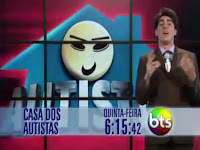 Its images have caused pain and anger among relatives of autistic people and to themselves. Being portrayed as people without feeling, without skills, without any capacity to a backdrop of understanding is already usual for our friends and children with autism, but air these images, presenting them screaming and drooling only reinforces far from reality stereotypes.

MTV is a channel aimed at young audiences, supposedly "cool". These people reproduce ideas, images and slogans displayed on it. Making this picture, the way it was done, and ultimately strengthen prejudices induce the youth to abuse and harassment of people who are truly autistic and others who, for whatever reason have withdrawn behavior or a learning disability, relationship or communication.

After seeing the images of the MTV comedy, now hosted on youtube by a group of youths, many families have taken some initiatives to criticise them. One of the main targets on Twitter turned out to be the comedian Marcelo Adnet, through your profile @marceloadnet0, who claimed to have disagreed in the table, and that he just imitated Silvio Santos as its presenter.

You may protest. Send a message to @MTVBrasil through twitter.